Bix&Marki, a duo of original acoustic soft jazz-French chansons, was created by Bix (Beatrix FIFE) and Marki(Mamoru KATAGIRI), when they came back to Japan after 10 years spent in Brussels, in the end of 2010.
After having graduated in jazz guitar from the Conservatoire R. de Bruxelles and played various kinds of jazz music, Marki started composing tunes with harmonies and rhythms adjusted to Beatrix's lyrics, whispering voice and flute solos.
The French lyrics and the rhythm of the music and language, as well as the melodies, have a feeling of Japanese manga and French surrealism: in a contemporary way, being at the same time an insider and an outsider of the society,
9 CDs have been recorded.
Their life and music philosophy brings them to play concerts in various parts of Japan for different audiences, in different places.
Welcome to our concerts !
3 songs can be listened to on the Sound Gallery 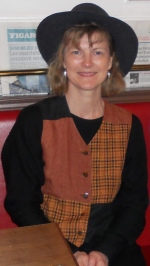 Bix writes the lyrics, sings and plays flute solos in Bix&Marki.
Born in Stockholm. She grew up in Rome in a Norwegian, British and Italian family, speaking 3 languages. At the age of 7, her family moved to Paris, where she completed her secondary studies in French schools and also learned to play the classical flute. While studying at university in Oslo she also started to paint and to do theatre. She was a trainee for 6 months in NYC at the New Dramatists’ studio. She then studied art in Oslo and at the Fine Arts Academy of Budapest. In 1990 she won a prize in an art competition in Austria, giving her the chance to come to Japan. In Kyoto she studied Japanese calligraphy and worked on performance art between 1995 and 1999, together with philosopher Michael Lazarin and musician Mamoru Katagiri (Marki). She also played music for dance companies in the Kansai area from 1997 to 1999. She moved to Brussels in 1999 continuing to paint, to exhibit works and to give concerts. As well as learning to play jazz at the Music Academy of Brussels, she played in the Bix Medard electropop group and founded the Brussels Language Activities, school of language and culture. She got a Master’s degree at the University of Franche-Comté in Besançon in 2008. After moving back to Tokyo in 2010 she started Bix&Marki, a musical duo of original French songs. While working on her music and painting, Bix teaches French at universities, specializing in role-play and language, through art and personal expression.

Mamoru writes the music for Bix&Marki, exploring special jazz harmonies in a contemporary way. He lived in Belgium for 10 years, and graduated from the Conservatoire R. de Musique de Bruxelles in 2010. He is influenced by European jazz music. His playing is like knitting harmonies together in a colorful pattern of sounds.
Mamoru went on a trip to NYC and Europe with his guitar on his back in 1990 after he studied jazz in Kyoto for 5 years with guitarist Takeshi Yamaguchi and had played in jazz units in the Kansai area. He came back to Kyoto and created a gypsy-jazz music unit with violinist Makoto Kobayashi. He also played in blue-grass music bands.
He met Beatrix and philosopher Michael Lazarin in Kyoto, and founded the Phylloxera art performance group in 1995, which continued to present performances until 1999. He started composing music for Phylloxera and for dance groups, like Taihen and Mau dance in 1997. On an invitation from painter Yoshi Fujisawa, he went to Brussels in 1999, together with Beatrix, and after 3 years, entered the Conservatoire de Musique de Bruxelles. He majored in jazz and graduated to a Master Degree at the Conservatoire in 2010. He moved back to Japan, Tokyo, in 2010, where he composes for Bix&Marki, plays concerts and teaches the guitar.